So where the hell have I been, both of you might be wondering. I’d say that I’ve been to hell and back but it’s really not been quite that dramatic. This past weekend was dominated by a whirlwind trip to New York for a wedding. The biggest annoyance about it was not even the 14 hours spent driving there and back, or that I got a nasty cold while there forcing me to spend most of Monday unconscious but mostly the fact that there were absolutely NO SHOWS involved in the adventure. Ugh! We did spend some high-quality time with some great relations though and Long Island in the Fall, well, there are worse places to be.

Somewhere along the lines, I missed Susan’s review of “Driving Miss Daisy,” which I guess I’m going to have to add to my “must-see” list for the fall, based on the good things I’ve been hearing.

I did catch Mary B’s round-up of “Eurydice” and “Four Queens” in Style today, though. Ms. Burruss’s review fulfilled my curiosity a bit about the new RTP venue – not altogether flattering – and filled in some interesting staging details about the Firehouse show. I’m grinning in anticipation of seeing Larry Cook’s performance – not to mention Joe’s – well, and Laine’s too – etc. etc. And hey, thanks to the Firehouse Flash, I was alerted to the John Porter review of the show on WCVE, another rave, of course.

I’m gearing up for another weekend of openings, and this time I’m actually seeing some of them. Luckily, Mary B also provided another in the long line of “Richard III” previews to get me warmed up for that one. Perhaps I’ll do some mopping or something to get ready for Barksdale’s “Clean House.” I'd do some studying up on how to write a good review of a Shakespeare play by reading Hilton Als' critique of the current production of "The Tempest," but that would just depress me, given that I'll have about one-fifth as many words to lay out my learned impressions.

Beyond the driving, sneezing, sleeping, reading, listening, gearing up, and potential mopping, I’ve been busy with two other “ing”s: tallying – RSVPs to the RTCCs, which have trailed off lately; come on people! – and ordering the awards themselves which just came in today. Here’s a picture: 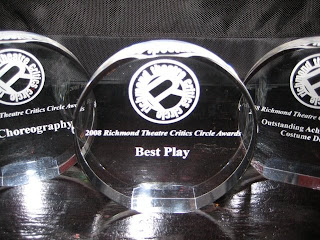 Hope to see you at an opening this weekend!
Posted by Dave T at 9:35 PM

With Richard III open I actually got out this weekend and saw Eurydice myself. I was blown away by both Joe Inscoe (as usual) and Laine Satterfield. They were fantastic and deserve all of the recognition and kudos they recieve. I did have some problems with some of the production elements but overall it is well worth seeing...very touching.