On two occasions recently, I’ve found myself in the company of people who don’t like musicals. Rather than treat them like traitors against the realm or shrink in horror at their inhumanity, I’ve engaged in a bit of conversation with them, not unlike what Sarah Silverman has been doing in her new show.


Through those talks, I gained some understanding of that anti-musical perspective and I like to think that Murder Ballad would be the rare musical that would appeal to even sung-through haters in the world. The show’s immersive staging at Club Infuzion in Scott’s Addition means you can practically reach out and touch a performer at multiple points during the show. It moves fast, it’s plot is simple and straightforward, and it features consistently propulsive music (thanks to Kim Fox and her very peppy band). Director Lucian Restivo has cast a rock-solid group of actors who nail every beat of the love-triangle-gone-deadly story. 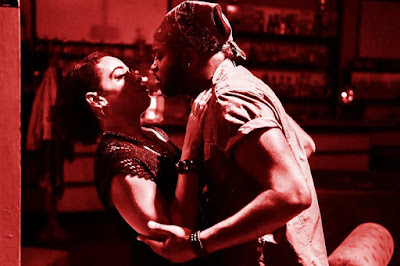 As someone who tries to sit in the front row for most shows, I was in heaven. The production layout has four principal focal points: an elevated mainstage where the band plays, a house-left bar, a house-right pool table that becomes a bed, and another elevated area near the back of the house. I was happily spinning in my seat to adjust my sightlines from one to the other throughout the compact, intermissionless 90-minute performance, my favorite moments being when one of the cast members was singing just inches away from my table.

And what a cast! Rachel Rose Gilmour has been the highlight of two other of my recent favorite theater experiences (Toxic Avenger and Lysistrata) and she brings a delightful, delicious, darkly sarcastic slinkiness to “Ballad’s” narrator. She inserts regular commentary on the growing rivalry between Tom (Durron Tyre) and Michael (Chris Hester) for the affection of Sara (Katrinah Carol Lewis). Tom, a bar owner, has affection with a fiery lustful underbelly that eventually clashes with Michael’s, a poet/MBA who is raising a child with Sara and so operates from a more possessive, papa-bear place. There’s no doubt things are going to end badly but exactly how isn’t clear until the very end. 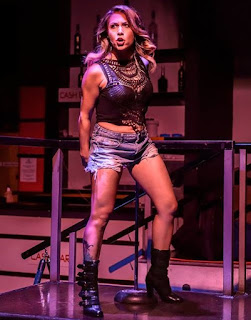 With the brevity of a musical like this, some nuance can be lost and it’s up to Hester and Lewis to provide enough layers of personality to make Michael and Sara an interesting couple. Both do a fine job, Lewis creating a believably disaffected wife and mother, loving her family but craving her former wild life. The energy of her “I don’t want to know your name” hook-up with Hester persists throughout her domestic scenes. Hester has to do more with less but, particularly given some of the extravagant characters he’s played in the past, captures some pretty delicate gradations: projecting a sweet protectiveness in his early scenes, transitioning to a wound-tight buttoned-down peevishness, and ending with full-bore boiling over.

It may be the hunky Tyre, though, that rivets many a viewer. He has one of the first musical highlights of the show in his sweet rendition of “Sara” and, besides rocking an awesome leather jacket in the latter scenes (costumes by Sheila Russ), he has a single-minded intensity throughout that’s pretty entrancing. 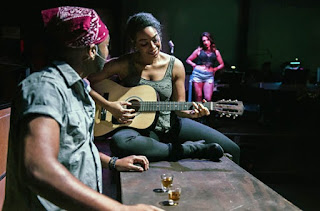 Kudos must be given to Restivo for navigating a tricky staging challenge and delivering such a stylish thriller. I may be wrong: being immersed in a musical could be some people’s worst nightmare. But there are so many entrees to Murder Ballad, it has appeal for anyone with an affection for film noir or for messy love stories or thrillers or in-your-face drama or for good-looking actors with great voices or for any theatrical experience that’s different than most others. Doesn’t that cover just about everyone?
Posted by Dave T at 2:04 PM 0 comments