First, a caveat: I’m not a marketing professional. I used to be kind of one (when you work for the State or for a non-profit, they call marketing “public education”) but that was many years ago and whether I was any good at it is certainly highly debatable. So I don’t really have bunches of insight on what works or what the current philosophy is on many aspects of marketing. That would be more Mary’s bailiwick…

But I’ve been ruminating on theater marketing in town, specifically some of the images I’ve been seeing in the papers and in local shops and stores to promote recent productions. I first started thinking about this with the noteworthy artwork the Barksdale created for their current Willow Lawn season. For some shows like “Member of the Wedding” and “Doubt,” I think this imagery has been superb – evocative, iconic, a bit edgy, certainly memorable, etc., -- and has added real pizzazz to the marketing. For others – “Moonlight and Magnolias” and the upcoming “The Little Dog Laughed” – I’ve been less enchanted with and, with “Little Dog” specifically, even a bit confused. The cat with the fiddle is an interesting image, for sure. I’m just not sure what I’m supposed to take away from it. Is the whole show supposed to be like a nursery rhyme?

Richmond Shakespeare has also gone with some interesting imagery this year. I can’t find it on their website anymore so I’ll have to work from memory on this. At first, I had a hard time with the groovy font and banner work they were using for the show titles but this has grown on me over time and now I actually like it quite a lot. The artwork that looked like woodcut prints, however, I’ve had a harder time with. For “A Christmas Carol,” the image was an old four-poster bed with the side covers draped over and some commotion going on behind them. This image didn’t do anything for me and in fact, you can call me slow but it took me a while to even remember what this had to do with the show. For one of the shows, the image was someone peaking through a keyhole, I believe. This is a great image but I think its indicative of its effectiveness that I can’t even remember what show the image was supposed to be referring to.

What prompted me to go ahead and write a whole post about this is the new “Once Upon A Mattress” ads that I first started noticing this past weekend. It seems with these ads and with the “Little Women” ones before them, the Mill has taken a definitive step forward in their advertising, using pictures of actors from the shows and trying to get something iconic and memorable going. With “Little Women,” it seemed like they were shooting for something reminiscent of the picture from the movie (below). But in my opinion, instead of being warm and cozy like the movie image, the image the Mill used was a little stilted and prosaic. With the image for “Mattress,” I think they’re about 85% there. I like the idea of it – the princess on a tremendous pile of mattresses. But for some reason I don’t like the expression on Audra’s face. I think they were shooting for a funny-grumpy look but (just my opinion) I think the result is just kind of grumpy. Which I think is too bad because Audra is beautiful and the play is a hoot. I wish some more of the magic and fun of the show could have been captured. 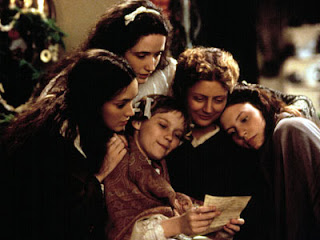 I understand that it’s somewhere between hard and impossible to evoke an entire play in one image and I really applaud the efforts theater companies are making to do it. RTP has had some real winners over the past couple of years and even newcomers like Henley Street – with their nifty “love hurts” poster for “Much Ado About Nothing” – have succeeded in occasionally making a great impression. Still, it’s a tricky business. I don’t think a great or lousy poster will make or break a play, but I do think that marketing imagery has an effect, even if it’s only subliminal. What do you think?
Posted by Dave T at 8:49 PM

Dave,
I agree with you, as a theatre goer and a marketing professional (at least I play one in a UR classroom) that the images associated with a show do have an impact on one's perception of the probably quality of the production and caliber of acting- I think you hinted at that anyway. I am grateful to you for citing all of he gorgeous work on the Barksdale at Willow Lawn poster series. It is very nice work.

I am also glad you brought up the MIll's photo style poster series, particularly the "Little Women" photo image which I personally thought was scary. Rarely has a less flattering and poorly styled photo been distributed to promote a show. It looked downright unprofessional to me - poor quality in all aspects. If I did not know of the high caliber of the Mill's productions (aka: "Urinetown" - yes I had to fit it in somewhere) and I was seeing that image as the first representation I had of the Theatre (if I were an out-of-towner say) I never would have chosen to go to that show.

I think a lot of it comes down to many factors - mostly time, energy, and money. How much time does any theater really want to devote to a poster? What energies will have to go into setting up a photo (i.e. getting the cast together, setting up the shot, who's going to take it, etc), and how much will it cost to make it look nice and professional. Do you really need a nice poster for the show, or do you put that extra money into sets, costumes, or - god forbid - paying your actors what they deserve? It also depends on who runs the marketing - vision, what their idea for a poster is, what resources they have to make it look good, how much experience they have in that kind of marketing, etc. Sadly, Richmond doesn't have a budget to make logos like they have for Broadway shows that become so iconic and well-recognized. I, too, agree that "Little Dog Laughed" looks misleading, and too much like a fairy tale to bring the whole family to, which is NOT the case. If you falsely advertise, you then have no right to complain if patrons walk out, or don't feel they were given proper information about certain content of any production. In defense of the "Little Women" poster, anyone who looks closely enough at it can tell that they obviously didn't have wigs and full costumes ready when they shot it, so they made the actresses use their own hair. Do we point fingers and blame? No - but again, it all goes back to managing it, making sure that kind of thing is ready on time, etc. Just my two cents.