You can read what the critics said about RTP’s “It Shoulda Been You;” they were all appropriately enthusiastic about what an amazing production it is.

I finally saw it last night and was similarly blown away. I did all of the things: laugh, cry, etc. As with many productions, I wish I had seen it earlier in the run so I could have seen it twice. It is indeed that good.


I’m not going to give a full review – to do this production and the incredible cast justice would require too many words. I will offer a few random observations, though:


n  The big surprise. I’m not going to ruin the show for anyone even though by the time anyone reads this the show will only have a couple of performances left. I was delighted by the reveal and it was pulled off smartly. I’m not meaning to throw any cold water on its effectiveness to point out that it replicates a surprise included in an RTP show produced not too long ago. Will there eventually be enough of these kinds of shows to build a weekend theater festival around?


n  Oy the goys. Here’s a topic for discussion: does it matter if a cast full of characters who are explicitly Jewish is made up of actors who mostly are not? Is this different than “In the Heights” where ethnicity is explicit? The show was using a lot of culturally Jewish tropes; is knowledge of those tropes – and a passing ability to do a New York Jewish accent – enough? The privilege of being welcomed into a Jewish family more than 25 years ago makes me a little sensitive about this one. Having said that, I only cringed a couple of times and, overall, didn’t really give it a second thought.


n  The lighting. The technical elements of the show were fabulous, with particularly impressive costumes by Tyler Carlton Williams. But man, that lighting! Sometimes, a great lighting design will be like the sumptuous sweet frosting on a yummy cupcake and that was certainly the case here. Michael Jarett bathed the walls in pink at times, had some fun functional elements with lights coming off and on alternately, and best of all, framed Grey Garrett’s lovely face at the finale of “A Little Bit Less Than” in the most exquisite way. In a show so strong technically, Mr. Jarrett pushed it up an extra notch. 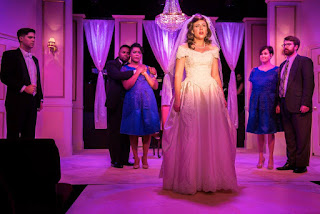 n  All for one, one for all. This cast was the very epitome of an ensemble, each performer supporting the other to create a fine and balanced production. But having said that, there were some amazing singular moments: Jessi Johnson and Durron Tyre just destroying “Love You Till the Day,” Susan Sanford’s imperial “Where Did I Go Wrong?” and just about everything that came out of Kirk Morton’s mouth. I could go on but really, the whole thing rocked.


n  And if that wasn’t enough. Last night, Louise Ricks was not able to do her role as Aunt Sheila/Albert’s Minion. So Nancy Collie stepped in pretty much at the last minute (from what I hear) and did a phenomenal job. Having only glanced at the cast list before the show, it didn’t dawn on me until someone pointed it out today that Collie was not in the original cast. She fit in seamlessly and, together with fellow multi-role player John Mincks, added some delightful grace notes to an already resoundingly funny show.


Having seen “In the Heights” on opening weekend, I’ve now seen two of the summer’s blockbuster hits. I’ve got to hustle to see “Heathers,” “MacBeth,” and “The Toxic Avenger” before it’s too late. Remember when summertime was sleepy time for theater? Thank goodness those days are gone!