Often, all the critics in town will love a show. Sometimes, opinions will be mixed. Seldom is condemnation unanimous.


I’ve been somewhat bewildered that critical opinion of the latest Quill production, Macbeth, has seemed universally negative. Quill hits more often than it misses so I couldn’t believe that they’d put on a total mess. I had to see for myself. 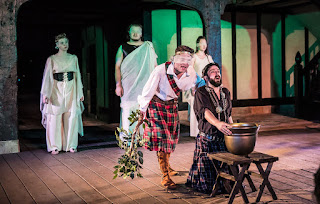 I went to last night’s show and I had a fine time. I can see some of the deficits in the production and it would be hard to match the dynamism of Jan Powell’s Macbeth five years ago. But still, I’ve seen Macbeth more times than any other Shakespearean drama and I’ve seen much worse than the current offering directed by Jemma Alix Levy. Maybe that’s damning with faint praise but it’s still praise.

So why was my experience so different than the critics’ in town? I have some thoughts.


n  Practice. The reviews generally described the fight scenes as tentative. That was not the case during the performance I saw. It seems perhaps the fighters in question spent at least some of the time during their off days practicing their fight choreography, or maybe the actual steps got pumped up a bit. Last night, Alex Burtness as Macbeth and Jeff Coles as Macduff went at it with a determined vigor, generating a great number of clanging sword sounds and convincing “oofs” and “ughs.” Their big fight scene actually got an ovation. Which brings up…


n  The People. The crowd last night was a bit odd – 20 priests were in attendance; honest! I was there as their programs were counted out. There was also a strong contingent in the front section that was very engaged – booing softly at Lady Macbeth or Macbeth himself later in the play, laughing at even the smallest jests, and even emitting emphatic “mm”s in response to some of the more dramatic lines. It’s hard to know if the cast responded specifically to that energy but it certainly contributed to that magic sense of communal enjoyment of an experience.


n  Perspective. Macbeth is an amazing and odd play: The supernatural elements, the brutality, the constant gendering of the action (here’s an interesting, possibly controversial article that talks about gender and Lady Macbeth and ultimately connects the dots to Hillary Clinton of all people!) The critics gave some pretty specific reasons why they didn’t like this production and I’ll agree with some of them in a minute. But it’s a pretty straightforward, uncluttered rendering and I appreciate that. The benefit of keeping things simple is that the two most powerful scenes – Macbeth sees a vision of Banquo at a dinner party and Macduff finds out the truth about his family – stand out in stark relief. In the former, Macbeth’s horror and confusion is palpable and ably mirrored in the dinner guests’ reactions. In the latter, Macduff’s naked grief is overwhelming and cuts through the decorum and formal language of the play with laser-sharp emotion. If other scenes were more intense, I don’t know that those two would land with such power.


Having said that, I had my issues with the production as well. I’ll echo others and say that I’ve seen some amazing things done with the weird sisters scenes and the approach here was just OK. I’ll also have to agree with my friend Mr. Porter and suggest that Rebecca Turner is a bit underwhelming as Lady Macbeth. It’s hard to compete with the echoes of Zoe Speas from Powell’s production and, while I did like some of Turner’s choices, the role is an epic one and it requires a pretty epic rendering.


In general, the supporting cast was fine but could have used the bolstering that actors like Bob Jones or Alexander Sapp have brought to supporting roles in previous Quill productions. Jeff Clevenger is always good but his comic chops might have been well used as the night watchman. One small issue is that Mr. Clevenger is brought on as a not-overly-costumed old man not too long after Duncan is killed and I wonder if some audience members get confused about the character change.


Mr. Burtness is a powerful Macbeth, though, and his transition from humble hero to reluctant murderer to full-blown treacherous paranoid is strongly realized. Cole is a noble Macduff and Thomas Hockey is a winning Banquo. The realization of the weird sisters’ predictions in the second act is underscored in a crystal clear way that I think makes the production work well for Bard novices.


So if you have read the reviews and are on the fence about Macbeth, I’d suggest you hop off the fence and give it a shot. The 20 priests sure seemed to enjoy it; you probably will too.
Posted by Dave T at 9:15 PM