Did you see the video of the on-stage proposal to Alana Thomas during the "In the Heights" curtain call last weekend? It’s just about the most adorable thing ever. Congrats to Ms. Thomas and her fiancé; may they have many decades of happiness together! (And thanks Rich for the head's up on this.) 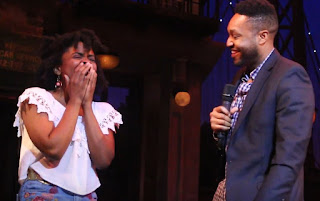 In contrast to a young couple making big plans for the future, I’m just trying to make plans for the this weekend and beyond. The arrival of the Modlin Center 2017-18 season catalogue has forced the reservation of several nights in the future.


The one absolute must-see down the road is the appearance by Lynn Nottage next February. Nottage is one of the most vital voices currently writing for the stage and I can’t wait to hear what she has to say about her creative process.


Before that, the National Theatre Live series will kick off in September. There are several of these broadcasts that I’m interested in with the Angels in America doubleheader being at the top of the list.


For this weekend, a stop by Hardywood for a refreshing downpour of Purple Rain is a must. These "Cover to Cover" events are incredible and one of many great ideas from the Shofner/Roop team. As anyone who has been to one of these before knows, most of the big voices employed are local theater vets or mainstays. The Prince lineup is impressive throughout but I’d probably go just to hear Jessi Johnson let loose on some his majesty’s classics.


The Heathers continue to be mean girls and selling out the performances I can get to. What can you expect from a show that’s literally killing it? Between Heathers, Macbeth, Toxic Avenger and Game of Thrones restarting this weekend, the blood is running like a river this summer. What could be making us look toward so many artistic expressions of violence? Could it be feelings of frustration and powerlessness amidst big-picture calamities we can’t control? Hm. I’m thinking both Prince and the “In the Heights” lovebirds might be pointing us toward better coping mechanisms.
Posted by Dave T at 1:31 PM