It’s silly to say that what makes musicals different is the music. But it's certainly the music that makes the difference in the currently running co-production by Yes, And! Entertainment and TheatreLab, “The Last Five Years.”

The accompaniment for many musicals in Richmond – and I expect most other mid-market cities – is often electronic. Musicians need to be paid and arranged and rehearsed and such, which can be expensive, so many shows are tracked. It’s easy to think that this doesn’t diminish the impact of the production, particularly if the vocalists are strong. 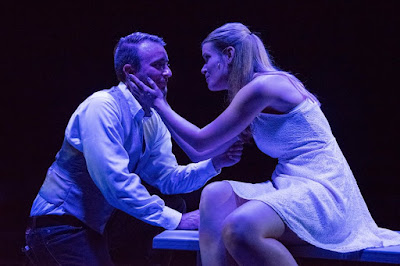 But then you hear the robust, glorious sound of musical director John-Stuart Fauquet’s consummate 6-person crew – 2 cellos and a violin bolstering the piano / guitar / bass trio – and you realize an essential element that is too often missing in other shows. It’s delightful to hear the soar and swell of this chamber group in service of Jason Robert Brown’s complex score. As my wife said afterwards, the music is essentially a character in this emotional two-hander and Fauquet and company bring that character to vibrant, almost symphonic, life.

The music perfectly complements performers as powerful as Christie Jackson and Alexander Sapp. Anyone who knows Richmond theater knows these two actors and how incredibly good they are. That director Chelsea Burke wrangled them both for this production was a stroke of genius; as soon as they were announced, this production became one of the most anticipated in town. 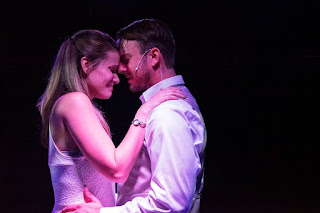 I don’t believe Style is going to do a review of this production because it already published a fine preview by Rich Griset. I’m not offering a review here and would defer to Mr. Williams at Sifter who gave a review that I (for once) am almost entirely in agreement with, down to his drawing attention to the occasionally glitchy lights. Jerry uses words like “flawless” and “charming” and “superb,” all adjectives I heartily endorse.

I will augment Jerry’s review by offering a few additional comments: 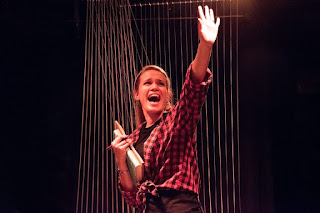 That said, this minor deficit in the musical’s book takes nothing away from the success of this production. This is the kind of production that makes me appreciate the surprising wealth of talent we have in Richmond. From the brilliant musicians offstage to the captivating actors onstage, it’s hard for me to imagine a better staging of this show.
Posted by Dave T at 6:58 PM