I can’t really add that much to Susie Haubenstock’s review of “Food, Clothing, Shelter," playing only a couple more times at the Firehouse. I agree with essentially every word, including the not-quite-successful aerialist interlude and the call-outs to Keisha Wallace, Kylie Clark and Donna Marie Miller for their great performances.


I do feel compelled to add a couple of additional tidbits: 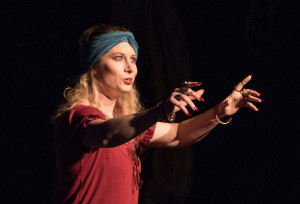 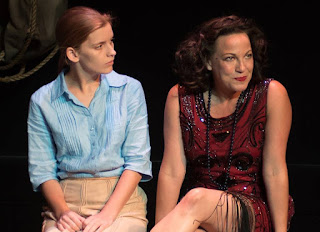 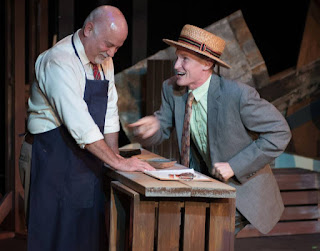 The immersive atmosphere director Joel Bassin creates at the Firehouse for this production draws every patron into what ends up being a communal experience. Maybe it’s because I was there on a Wednesday night with a pretty small house but there was a homey feel to the evening, a looseness where the 4th wall was much more permeable than usual.

In the end, “Food, Clothing, Shelter” is an ambitious production about relatively small stories. In some plays, it can seem a waste of time to linger on minor interplay that doesn’t have broader consequences in the world. But Wilson and Bassin have created an engrossing tale where small doesn’t equal inconsequential. In fact, as made plain in the title, such simple interactions often involve the core necessities of life. What could be more important than that?
Posted by Dave T at 11:16 PM

Thanks, Dave. My only complaint--about Firehouse's production, not Bo's play, which I have not seen but hope to see before it closes--is that Joel is giving it only a "limited run." I love the fact that Joel wants Firehouse to be the place where playwrights and actors and others in the theatre community bring ideas and work-in-progress. But I think that a two or three week run of a new play shortchanges a professional playwright with a body of work. Joel and I have talked about doing some of my work at Firehouse in the future--and maybe I am absolutely screwing up any possibility of that by weighing in here. But I would love for Firehouse to be as committed to new work as any other theatre. New plays by professional playwrights are not the same as Open Mike Nights or cabarets for local bands or singers. For whatever it's worth.

Much appreciated Dave so glad you enjoyed the production!- Frank