Performance spaces are a special interest of mine; at a recent conference of the Shakespeare Theatre Association of America, an annual gathering of companies that perform primarily Shakespeare, three artistic directors were charged with talking about the spaces in which they create live theatre: Tina Packer of Shakespeare & Co. (Lenox, MA), Christopher Gaze of Bard on the Beach (Vancouver, BC) and yours truly tried to qualify what is magical about our theatres and what lures audiences to attend. I spoke about Richmond Shakespeare’s summer Festival venue, Agecroft Hall and indoor space at 2nd Presbyterian, but also about Richmond’s new performing arts center. (Incidentally, Bard on the Beach sold out its entire summer run of four Shakespeare plays: 205 performances and more than 87,000 people.)

My interest goes beyond my profession and Richmond Shakespeare. The spaces in which artists create live performance to me are sacred spaces; they are the crucibles in which we fire the human imagination. We shine light on the very core of our humanity---when we cannot help but laugh, weep, or be lifted out of our seats. In those spaces, elegant or unsophisticated, we ponder the very truths of man’s ultimate dilemma, expanding on an ancient question as old as civilization itself: “Quem Quaertis?” What is it we’re seeking? A literal translation of this liturgical phrase is “whom do you seek?” It was tremendously influential on European medieval dramas, and thereby on the fabric of the Renaissance and on our own theatres today.

Today, theatre still speaks volumes about our very human quest to seek. Theatres reflect what’s happening among the audience and the performers. In short---our theatres represent the very core of ourselves. 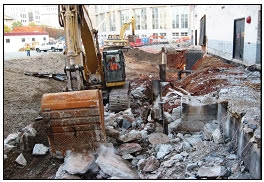 And what’s happening in Richmond? Plenty. As you can see from the pictures, there’s plenty happening at the RCS on site right now. Current construction focuses on a new stagehouse for the Carpenter Theatre, including selective demolition within the theatre and adjoining storefronts. It’s work of which the public seems largely unaware; many even seem unaware that the RCS effort has emerged from its toughest challenges and is making enormous leaps forward. Someone recently asked me, “isn’t that whole thing dead in the water?”

The effort to build Richmond Center Stage involves an impressive array of performing arts organizations bonded together in an Alliance for the Arts. It’s an Alliance that still regularly advises the Virginia Performing Arts Foundation. It’s an Alliance remarkable in its unity, and one which shows just how influential artists can be when they work together. It’s an Alliance like Richmond has never seen before. Richmond Shakespeare has played a small role on the board of the Alliance since its inception and in the planning effort of RCS. (We’ve actually been involved as far back as the first MAPS meetings in the late 90’s.) As such we’ve had a front row perspective on the evolution of the Virginia Performing Arts Foundation, which is charged with building Richmond Center Stage. 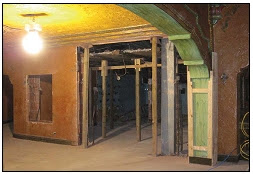 Today, Richmond Shakespeare is preparing to be a resident of the new Center, and we’re far from alone! At the last meeting of major users of the new arts center two weeks ago, the African American Repertory Company, Richmond Ballet, Richmond Symphony, Richmond Shakespeare and Virginia Opera organizations together continued active planning for the opening of RCS, slated for September of 2009. Also participating in this users’ group (though they couldn’t attend that meeting) is Theatre IV, and by extension Barksdale Theatre. It’s a region-wide effort of large and small performing arts organizations. How realistic is a 2009 opening?

Richmonders wary of pushed-back deadlines should know that the construction companies lose money if they miss the September goal. The photos included here are quite current; they were taken within the last two and a half weeks. If you haven’t driven by in a while—you’ll be surprised. Take a look; the new federal courthouse looks pretty great across the street, too.

So, what spaces will Richmond Center Stage provide to theatre artists?

One age-old space will be restored, returning a beloved space to use, newly renamed the Carpenter Theatre. Next, thanks to a generous gift a great new space will open, the Libby Gottwald Playhouse, a flexible 200-seat intimate theatre which we are working hard to ensure is available to a wide variety of producers, small and smaller organizations alike.

That space was thoroughly and painstakingly designed, with input from theatre practitioners and prospective users incorporated all along the way: it will have performance-hall acoustics, flexible seating, state of the art lighting equipment, and is already the most exciting new space in Richmond theatre since Barksdale’s move to Willow Lawn. Lastly among the performance spaces, RCS will include Rhythm Hall, which will primarily be a space for music but someone will find their creativity ignited by its many configurations and performance possibilities. Can we say Elegba Folklore Society or Richmond Jazz Society, anyone? 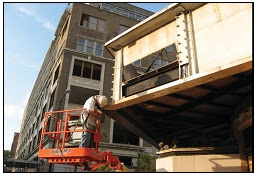 Also of significant note are new Educational Outreach spaces. The Genworth BrightLights Education Centertm, a new avenue for existing arts organizations to reach young people to foster learning tied to the arts; the BrightLights programming will exist on-site and reach out to surrounding school districts.

So what’s next? Right now all the design work has been finished and we’re following the process of construction and planning for the opening of Richmond Center Stage. Are you planning for 2009? We are.

I've been to a couple of these meetings myself, and I have been astounded and encouraged by the depth of knowledge, experience, and determination present in the people who are working on this.

I believe Olivia said it best in "Twelfth Night"..."Most wonderful!"

You know, Anonymous, the internet is a big place. If you're bored by the post, I'm fairly certain that you can find something interesting to read in less time than it takes to type "d-u-l-l".

It's attitude like that which has this project years behind schedule. If you're not excited about the biggest city theatre improvement project in decades, well, I just don't want to know you. Stay anonymous, by all means.

The theatre artists in Richmond who are making a big difference are the ones who are interested in more than memorizing their lines and getting a curtain call. They're the ones engaged in development, new works, business, growth, and planning; in short, the future.

Just because the local newspaper puts theatre news and reviews in the obituary section doesn't mean the theatre artists should.

Perhaps Anon wants this blog to be more like the Enquirer. What do you think Dave & Mary…maybe spice up this blog with gossip and scandalous photos?

Andrew Hamm said...
This comment has been removed by the author.
5:50 PM

If you're going to be insulting, at least have the guts to sign your name.

Hey guys, different anonymous here. Thanks for the CenterStage update. I want to be excited about it but I admit I'm not yet jazzed up. I first heard about this project maybe 10 years ago...right around the time TheatreVA was forced to leave the VMFA and didn't have a new home to move to. Agreed, no need to let Wilder's whims dampen the project but I myself still have a hard time believing it will be in place in 2009. The Foundation has a pretty good/interesting website but when I donated $100. several months ago I never received a thank-you letter. Hmm...maybe the staff is still organizing its processes? In the meantime, I've decided to go back to supporting my local theatre groups instead. Time will tell.

Having just come from an RCS major users' group meeting this afternoon, I of course acknowledge that there are obstacles. Most of them seem to be the ones you'd expect: issues of bureaocracy and the unwieldy nature of committees. But I can tell you this: It is going up, it is coming together, and it is going to revolutionize theatre in Richmond.

Thank you, anon, for your $100. Email me your name and address and I'll send you a card tomorrow.

Different anonymous here...and I just have to comment on an unrelated point. I've found a recurring theme among those willing to post either ugly or simply negative comments on internet blogs, and glsshs is a case in point.

The first theme is a complete lack of understanding of English grammar, including something as fundamental as how to put together a complete sentence. Punctuation, capitalization, subject-verb agreement, you name it - these people get it wrong all over the map. Strunk & White are spinning in their graves as we speak (hey, glsshs1492, I KNOW that reference is COMPLETELY lost on you, but if you should ever find yourself in a bookstore or - God forbid - a LIBRARY, you might want to check it out if you have designs of communicating your ideas in writing at some point in your life.)

The second theme amongst these types is that while they're quick to comment on what they don't like or what they think is wrong, they never, ever offer any useful ideas. Perhaps they simply have none?

An internet blog is a great place to share ideas, and to offer differing viewpoints. If you lack the knowledge or intelligence to communicate your ideas in writing, however, then you're just a waste of time. Some might even propose that waste extends to the moment of your conception.

While the last anonymous goes a bit farther than I would, I have to support the general sentiment. Frankly, this is what comes of anonymous internet posting: trolling, drive-by bitching, and communication without consequences. I'm starting to work on Richmond Shakespeare's official blog, and I'm seriously considering disallowing anonymous posts.

Starting, shmarting. Richmond Shakespeare's blog is UP AND RUNNING! http://richmondshakespeareblog.blogspot.com