Some big stories may be better on a smaller stage

So many superlatives have been spilled in the name of Gatsby. It’s a story that “ranges from pure lyrical beauty to sheer brutal realism.” As a novel, F. Scott Fitzgerald’s “The Great Gatsby” is “simple and beautiful and intricately planned.” The story’s appeal springs from an enticing intersection of “witty hopelessness” and “vivacious self-destructiveness.”

But even amidst the laudatory commentary, there are cautionary asides: “Gatsby is about the superiority of imagination over reality,” says the Guardian, “which makes it very difficult to dramatize well.” 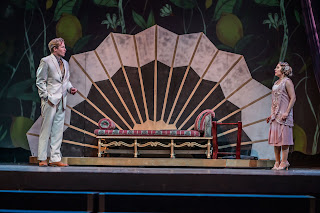 Indeed. Leaving “The Great Gatsby” as presented by Quill Theatre on the expansive Leslie Cheek stage at the VMFA, I had a reaction similar to the “slight feeling of emptiness” Julinda describes in her review. Interrogating my feelings a bit, I’d say I wanted a clearer picture of who some of the characters were, Daisy most of all.

The release of the movie version starring Leonardo DiCaprio prompted a small explosion of critical reconsideration of Gatsby in 2013; the book was a failure when released but has since been lauded as the true Great American Novel. That impossibly objective label aside, the book addresses sophisticated ideas while including plenty of glitz, glamour and mayhem to satisfy the masses, all in a compact plot that rolls out in robust passages of crackerjack prose. 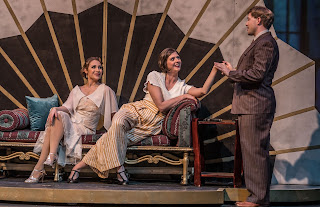 Still, there are plenty of detractors and this Vox piece in particular points to some specific challenges and opportunities in staging Gatsby. “It is pleasant to look at, but you will not find any people inside,” the author complains. “[The characters] function here only as types, walking through the pages of the book like kids in a school play.”

The challenge then is for a director and her actors to flesh out what they are given to create fully articulated characters on stage and director Jan Powell does a great job with several of her players. In his Richmond stage debut, Kurt Smith carries off the title character’s single-minded focus on Daisy with panache. He’s strikingly handsome but with a hint of awkward vulnerability. It helps that, as a character, Gatsby has an emotional trajectory that’s articulated clearly enough for professional psychoanalysis. 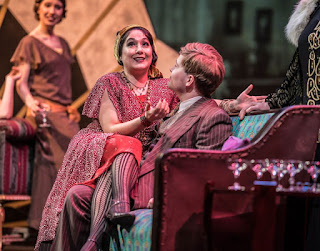 Cole Metz is another stand-out. As Daisy’s bullying husband, Tom, he could be a simple racist asshole, but Metz effectively embodies a version of patrician entitlement that transcends that reductive description. Chandler Hubbard’s Nick provides the peephole into the inner lives of the other characters and he manages to be an fairly effective audience stand-in with his reactions to the plot’s machinations.

Any excuse to put the delightful Michelle Greensmith onstage is a worthy one after her amazing turn in last summer’s “Taming of the Shrew,” but the side romance between her character, Daisy’s friend Jordan, and Nick adds little to the proceedings. In striking contrast to the fancier folks, Tom’s side piece Myrtle as played by Amber Marie Martinez explodes with earthy energy, highlighted by costume designer Cora Delbridge. The prominent reds in Myrtle’s dresses stand out against the whites and washed out pastels of many of the other outfits. 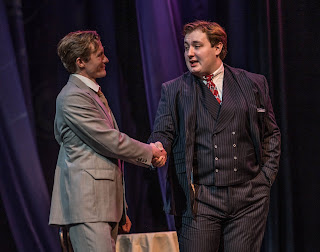 In portraying the animating object of the piece, Rachel Rose Gilmour has an impossible task playing Daisy. It was instructive for me to watch clips of film versions of the character, with Carey Mulligan’s sad and ethereal depiction more entrancing than Mia Farrow’s oddly antic take. Gilmour is fetching and flirty and, in one of the later scenes, I found her protestation to Gatsby “you ask too much” to be the most revealing and compelling line of the show. The quandary of making Daisy something substantial may lie in what the Vox author calls “the travesty of [Fitzgerald’s] female characters -- single parenthesis every one, thoughtless and thin.”

But a bigger problem becomes clear after watching the movie depictions (clips from both the 2013 and 1974 movies can be found here). Though it centers on the love lives of a small set of New Yorkers, “The Great Gatsby” endeavors to capture a huge sweeping story, encapsulating everything from moral commentary on the decadent 1920s to broader ruminations on the endemic problem of the so-called American Dream. To address all of that, movie director Baz Luhrmann could fill the screen with ridiculous amounts of lavish revelry and then, when needed, draw the camera in tight for subtle intimacies. 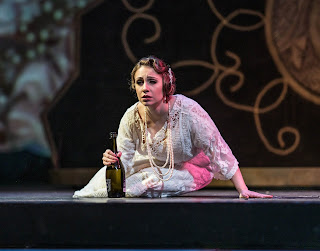 Those contrasting frames can be depicted on screen and conjured in a reader’s mind but are harder to convey on stage. For this production, the VMFA stage is nearly bare except for a central rotating set piece and, while the party scenes crackle with energy, it would be hard (and expensive) to create the sense of overstuffed glamour that would be appropriate.

When the hard-hitting truth-telling begins, the scenes are too far from the audience to have a visceral effect. I couldn’t help but imagine whether this show would benefit from a setting like Virginia Rep’s Willow Lawn stage, where the audience could be easily swept away in a party’s extravagance in one minute but with close enough proximity to be immersed in the dramatic interplay that punctuates the final scenes. 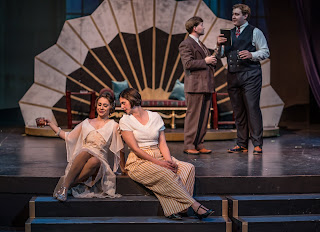 Powell knows how to pull an audience into a production: her Richmond premiere was a masterful "Macbeth" that squeezed the action into the alley between two banks of seats and her "King John" had a character emerging from beneath seats in the audience. This Gatsby sometimes feels remote, particularly when there's nothing happening in the downstage section of Reed West's two-level set.

The large stage does provide ample space for the second act opener, a doozy of a dance playfully choreographed by Jeremy Gershman and Kayla Xavier. There are moments of similar spry energy interspersed throughout this production and watching actors like Smith, Metz and Martinez do their work is worth the price of admission. However, as Fitzgerald says, “There must have been moments…when Daisy tumbled short of [Gatsby’s] dreams,” so too are there moments when this production falls short of expectations. 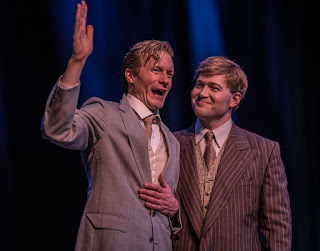