As the lights went down at intermission of Quill Theatre’s latest production, an all-female staging of “The Taming of the Shrew,” I leaned over to one of my companions and said, “I don’t think they’ve solved the problem.”

If you’re reading this, you know what I’m talking about. The brutal, jarring, incomprehensible-to-modern-audiences misogyny of “Shrew” has been fretted over for decades, with directors reworking it into a “Secretary”-style S&M liberation tale or gender-reversing the characters to subvert the dynamics, using the play’s framing device to add commentary or simply rewriting the ending to change the most uncomfortable parts. Regardless of its problems, “Shrew” keeps showing up on theater schedules on the regular, with productions on stage right now from California to Massachusetts, not to mention the RSC staging in London. 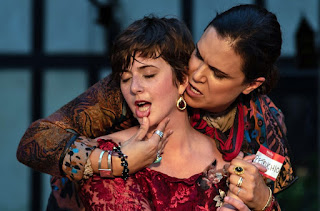 Some scholars have suggested the problem isn’t the play but our pesky determination to make modern sense of dated sensibilities. Maybe so but personally, I’d had enough “Shrew” after the 2006 Richmond Shakespeare Festival production, adding it to my growing “I never need to see that again” list. The ambitious but flawed 2013 staging did little to move me from my agreement with a London critic’s assertion that “Shrew” is “one of the most deeply unlovable of Shakespeare's plays.”

I doubted director Chelsea Burke’s choice to demasculate the cast would change much. The play’s problems are deeper than “Katarina is pommeled into subservience.” Bianca’s coy complicity in the courtship paradigm presents a somewhat-subtler sexism and her father Baptista holding a bidding war for the right to bed her (a bedding war?) is a face-palm worthy example of no-this-really-isn’t-funny tone-deaf banter.

So how did the wily Ms. Burke win me over by the end of this quote comedy unquote that is predicated on violence, submission and abuse? To borrow a phrase, she leaned into it.

I didn’t see the 2016 Shakespeare in the Park all-female cast version that Burke possibly borrowed this idea from (her director’s note is maddeningly oblique). But at least one article about that production talks about Katarina’s eyes being “wide and anxious” during her final speech and Bianca’s face “collapse[ing] into a mask of horror” as she listens. In her luminously intense portrayal in the current production, Michelle Greensmith delivers the monologue not as a lecture but as a plea, her every mannerism reflecting PTSD rather than happy subservience. Thanks to Greensmith, it’s impossible to shrug off the manipulation, gaslighting, and cruelty her character has experienced as some clever romantic plot. Shakespeare’s text hasn’t been changed but, in her direction of this moment, Burke infuses an appropriate level of #MeToo-era awareness into the scenario.

If that description makes this production seem like a heavy slog through a gender studies seminar, I can’t emphasize strongly enough that Burke’s amplification of the tragedy of Katarina works because of the delightful goofiness of the play’s action beforehand. Burke allows an exceptional crew of comic ladies to pepper their parts with asides, rejoinders and other funny business that bolster nearly every scene, punching up what is already some pretty spry repartee. Maggie Bavolack extends her already expansive range with her hilariously old Gremio, Allison Paige Gilman makes her plucky Tranio the comic lynchpin of the plot and Erica Hughes adds a sweet simpleton vibe to her late-in-the-action emergence as a key player (particularly observant folks will enjoy her unsung but very funny turn as an audience member early on).

The MVP (most vociferous provoker) of Laughter, however, has to be Desiree Dabney who has apparently never been in a scene that couldn’t be enhanced by a pulled face, under-her-breath adlib or other wisecrack reaction. She, along with many other cast members, regularly single out audience members to talk to, hand props to, and otherwise make directly personal what could otherwise be an alienating theatrical experience.

Burke seems to instinctively understand (again, some commentary would have helped) that breaking down that fourth wall, insinuating all of us in the fun and frivolity during most of the show, also indicts us all in the trials that befall Katarina. Her “comeuppance” is uncomfortable, more so because we’ve all been roped into a jaunty good time – complete with contemporary girl power songs that get toes tapping at the top of both the first and second acts. 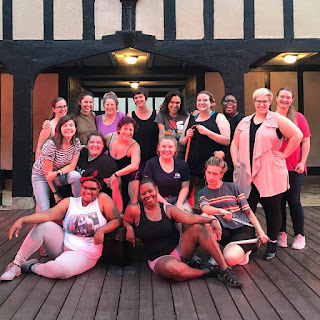 Speaking of music, the 2016 NYC production apparently utilized Joan Jett’s “Bad Reputation” as its coda, an angry anthemic F-you to the patriarchy. The pensive take on No Doubt’s “Just a Girl” that wraps up the action here is Burke’s final slice of genius, a song that, stripped of its perky ska beat, reinforces the similarities between now and 16th century Italy, rather than pointing to any progress.

Before anyone stamps a big QED on this production, claiming the problem definitively solved, Burke doesn’t escape all of the landmines Shakespeare embedded. If anything, the sweetness of Nora Ogunleye’s portrayal of Lucentio – the plot’s requisite “good guy” – makes the turn her character takes during the final wager between the show’s dude-bros even more problematic. And speaking formalistically, there’s no way around the Bard’s flagrant dismissal of the “show, don’t tell” proscription in scenes (e.g., the wedding) where particularly flamboyant off-stage action is described rather than enacted.

But I’d have to echo Style Weekly’s Claire Boswell in saying this comes as close to the “Shrew” I’ve always wanted, to the extent I’ve ever wanted a story of humiliation and misogyny wrapped up in deceptively pretty language. Though I’ve finally heard a version of this tune that I liked listening to, it doesn’t mean I wouldn’t prefer the song relegated to the (Not-So-) Golden Oldies bin forever.

(Quill’s “The Taming of the Shrew” runs at the lovely Agecroft Hall through August 4th.)