I dragged my poor exhausted wife out to opening night of "Guys and Dolls" last night. She enjoyed the show -- being a lover of the show's music since playing Adelaide in high school -- but I think she would have enjoyed a nice long nap even better.

A night out with my sweetie (even when she's under the weather) enhances any show for me but I had even an additional treat last night. Seated to my left was the lovely and talented Jennifer Meharg, wife of "G&D"'s Nathan Detroit, the lucky and talented Scott Wichmann. Besides being extremely friendly, Jenn is stunningly pretty so while sitting by her and making pleasant conversation, I was kind of feeling like an awkward teenager. Perhaps I'm always a little additionally intimidated by her because the first role I remember seeing her in was "The Secretaries" at RTP where she pretty convincingly played a psycho killer. It looks like she was pretty angry in "Richard II" last year, as well. 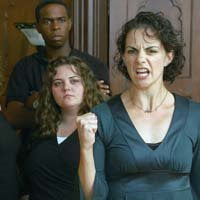 If you need a personal trainer, though, don't be intimidated. She's really nice in person.

We availed ourselves of the valet parking at the Empire, which seemed to be quite a hit with the older patrons (um...like us). The show was everything you'd expect from one of TIV / Barksdale's mainstage productions at the Empire, that is, pretty darn dazzling. Once I've had a chance to get some more specific thoughts down in a review, I'll elaborate. I also had a great time at Richmond Shakespeare's "Compleat Wrks" on Thursday, where I had a chance to chat with critical companions Susan H. and Mary B. It seems as though Susan had a great time as well; check out her review in today's paper.
Posted by Dave T at 12:34 PM

I enjoyed Compleat Wrks. very much, too. Looks like their official Opening Night might get rained out. . .that's a shame.

Opening night did NOT get rained out after all! It was a fabulous show!